Batman #39 Review: Joker’s origin will never be revealed (which is a good thing) 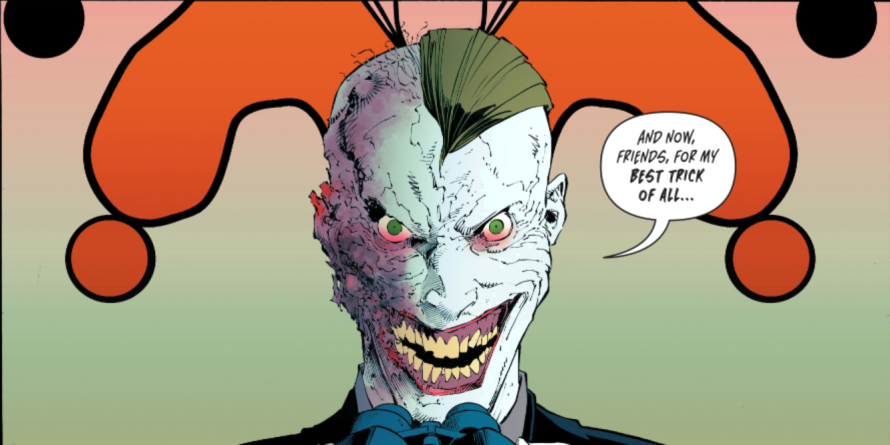 Big spoilers about to follow for Batman #39: so heroes unite with villains and butler’s hands get chopped off, the Joker is fear and chaos personified, especially because his character is such an enigma. There’s been a lot of (misinformed) whining about the Joker’s ‘new origin’ in this Batman: Endgame arc, but I think Batman #39 made it pretty clear, that there is no definitive Joker origin. So let’s discuss Batman #39!

With only one issue left in Scott Snyder’s spectacular Endgame arc, Batman #39 was action packed. The story was so fast paced it felt like I had only read 5 pages before the issue ends on a cliffhanger.

First of all, it was great to see the Court of Owls in the issue. Even with their huge egos, and grand speeches, Batman could give no shits. All his mind is on is getting the cure, and finding out if the Joker is immortal.

Meanwhile the Joker is having his own little adventure in the Batcave. Now some people have speculated that this whole Batman: Endgame arc is some kind of delusion, that it’s not really happening at all. The things that happen in Endgame are so insane, it makes you question whether this is actually happening. For example the Joker…chopped Alfred’s hand off. Like what??? Is Alfred going to have one hand now?? I just…this whole arc has been so insane.

Then in a moment that reminded me of Burton’s first Batman film, the Joker starts a parade. Of course once again the Joker makes his whole absurdist stance clear, making his usual speech about the meaninglessness of life.

Batman’s great plan for stopping all of this is uniting with the villains of Gotham to stop the Joker. It’s truly sweet that the two sides can put their differences aside to stop this maniacal guy. This maniacal guy who teases that he is about to unleash his “best trick of all”.

What could possibly top what he has already done? Snyder has teased that this will be the last of Joker we will see for a while, so it’s safe to assume that what ever it is, it will be big.

But now let’s discuss the Joker’s origin. I’ve seen a lot of complaining about Snyder’s new origin for the Joker. The origin being that, the Joker is in fact immortal. I have already discussed that I believe this is not the case, and the illusion of the immortal Joker is to simply enforce to Batman that he is just a man, that he cannot save the world because of his mortal limitations.

The story attached to the end of #Batman 39 shows us the reveal of a book Dr Zaheer had been writing, ‘Clown Prince: The true story of the Joker’. Zaheer believes she had finally figured out the true origin of the Joker. That his name was ‘William Distal’. She believed William Distal, aka the Joker’s sister went missing when he was a child, so out of fear his family abandoned him. He ended up in several foster homes, and grew up to be a bully who liked to turn people against each other. It’s a pretty simple story, but of course it wasn’t true.

Zaheer’s work was all for nothing, and in his creepy little speech to her he says, “Where I always go. To that little corner in the back of your head where all the bad things hide.That’s where I’m really from. That’s the real truth of it. I prefer not to think of it as multiple choice…it’s more choose-your-own-adventure”.

And really that’s the only truth about the Joker we will ever know. He is our greatest fear. He is this force of chaos. He is especially scary because we don’t know him as a person. He’s more myth than man. We don’t know how he was like as a little boy, don’t know what happened to him to make him this way, and that’s scary, the unknown nature of the Joker.

I have no idea what’s going to go down in Batman #40, but Batman #39 really showed the fear the Joker can bring out. Batman, out of fear, was forced to team-up with Gotham villains. Zaheer, out of fear, shot herself.

Overall Batman #39 was an intense, action-packed issue, however failed to really reveal anything new, but was a great set-up to the final issue of the Endgame arc. This insane arc is perfectly fitting for the insane Joker. But now the big question mark is, how can Snyder possibly wrap up this story? (And what is going to happen to the one-handed Alfred now???).