We may not have an official release date yet, but we’re already hearing rumour’s about Affleck’s solo Batman movie. The new rumour from JoBlo (quite reliable) claims that the villain will be Red Hood!

Red Hood is a fan favourite character, and with an established Batman it makes complete sense to introduce him.

Red Hood aka Jason Todd, was the second Robin, after Dick Grayson, and was quite troubled. He never felt like he was good enough to replace Dick, and felt resentment towards Bruce as he felt like Bruce didn’t care for Jason as much as he cared for Dick.

To prove himself to Bruce, Jason went out on his own on a lead, and ended up falling into the trap of the Joker. The Joker ended up torturing Jason and killing him. But…he didn’t stay dead! As most comic book characters who die, Jason came back, via the Lazarus Pit, and came back with a vengeance.

He was so mad to see that Bruce moved on after his death that he tried to kill Batman. Eventually he calmed down though, phew! The New 52 changed his origin slightly. It was revealed that the Joker basically planted Jason Todd in Batman’s hands. Joker set it up so that the two would meet, knowing Batman has a thing for taking in orphan kids.

The Joker’s plan was to give Jason to Batman, so that he could take him away from him again. We find out that Jason’s mum isn’t dead and a meeting is put in place for Jason to meet his mother. Of course this is the Joker’s trap and Jason gets killed. Talia Al Ghul eventually brings Jason to the Lazarus Pit for revival.

The New 52 version seems a little too elaborate for them to do in the films. We already saw in the Batman v Superman trailer, Jason Todd’s Robin suit is on display, damaged with supposedly the Joker’s graffiti on it. Clearly if this is true, there will be some set up of Jason in Batman v Superman.

Which is completely necessary, because although comic book fans know who Jason is, the general audience doesn’t. An animated movie was made of this story line called, “Under the Red Hood” and it was incredibly emotional, as Jason was a character we knew and connected to. Seeing Jason’s downfall is tragic. And seeing the influence Batman has on other people is also tragic.

Let’s be honest Batman is cool, but he wouldn’t be the healthiest guy to hang around. The emotional turmoil one goes through to keep up with Batman and his issues is enough to make someone mad. Even though Jason comes back crazy, you understand his anger. He was taken in by Batman when he was vulnerable, and never felt like he truly belonged. He ended up getting killed and when he came back he saw that Batman was back to his normal life, seemingly unaffected. I would be pissed too (maybe not going on a killing spree pissed, but still pissed).

Using Jason and exploring Batman’s past would be a new and different way to tackle a Batman villain. We’ve often seen the same type of storyline when it comes to Batman villains on film, so it would be good to explore a character that has a personal connection to Bruce and his past. 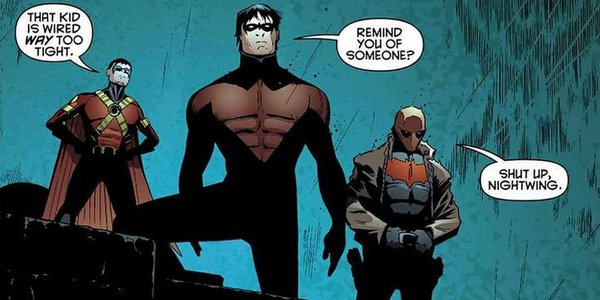 The article on JoBlo also mentioned that Nightwing aka Dick Grayson would also be in Affleck’s solo Batman movie. If true this puts to rest the rumours that Dick would be dead, or that Scott Eastwood is secretly Agent Grayson. Again this makes a lot of sense, an older Bruce Wayne means an older Dick Grayson.

Nightwing is an incredibly popular character, and to not put him in would be silly. Dick Grayson provides a great balance to Batman’s dark and brooding persona. Having Grayson around keeps Bruce sane and grounded, and considering the way they describe this Batman, it would be good to have Grayson around to keep Bruce from going all crazy.

Hopefully this turns out to be true. The Bat family hasn’t been properly explored in live-action (let’s ignore Batman and Robin) so Affleck’s solo Batman movie can be a great way to explore the deep, complex and messed up group that is the Bat family.

Anyways we won’t get confirmation on this for a long while now though, so until then fingers crossed this all pans out!