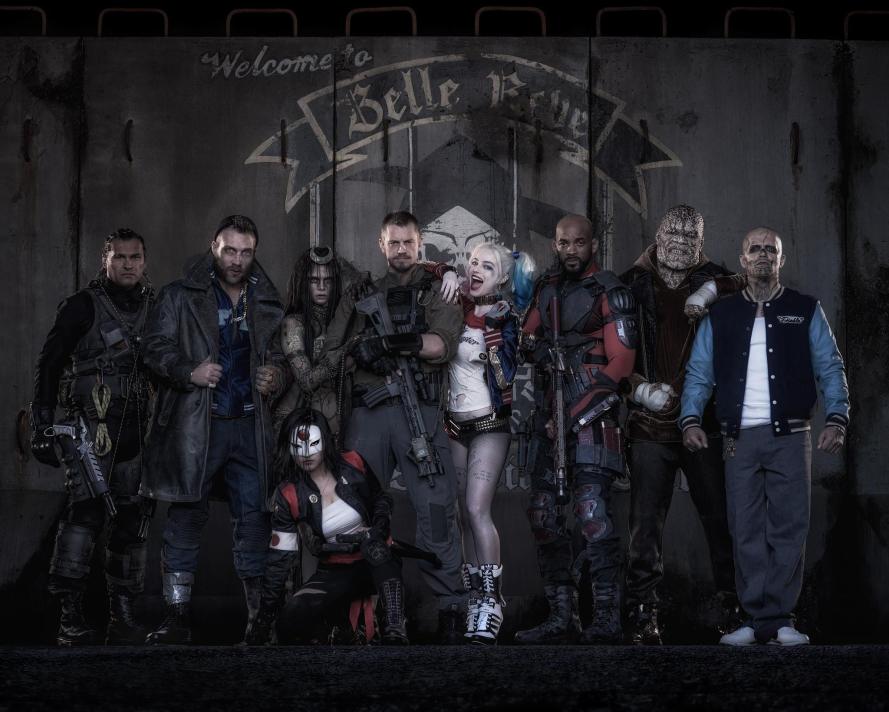 Umm excuse me Mr David Ayer, can you stop getting us overly excited for a movie that is a year and a half away, because it makes the wait all that more painful. So yesterday David Ayer tweeted out the official look at the Suicide Squad cast in costume, and they look pretty damn great. So let’s run down this cast image and discuss the Suicide Squad!

First off let’s talk about one of my favourites, Harley Quinn! I’ve already discussed about this at length before, but Margot Robbie is perfect for Harley Quinn. That image alone proves it to me, as she has perfectly captured the wonderfully insane nature of Harley Quinn. As for the outfit, it is more New 52 than Bruce Timm. So for those expecting her look from Batman: The Animated Series may be disappointed, but really as long as they capture her personality, then it will be fine. Personally, I love this look, it’s cute, sexy and insane. Some people have said it doesn’t even look like Harley Quinn, which is ridiculous, just look at these two images:

You can’t tell by the released filtered image, but she is wearing blue and red shorts (which you can see in the set pic above), so her look is pretty much New 52. Also like her boy Joker, Harley also has tattoos. It’s been pointed out that her tattoos are upside down, meaning she probably did them herself (as you do when you’re bored). She’s even got ‘Puddin’ tattooed on her, so it’s unclear whether the Joker and Harley are still a couple in the film, but they definitely were in the past.

Moving on to another one of my favourite characters, Deadshot! After this image was released, David Ayer tweeted out a solo Deadshot image, and it’s pretty much ripped straight out of the comics. The looks seems a little clunky in the image with the padding on him (I’m not wearing hockey pads!), but other than that it looks great. Interestingly enough it appears he has the phrase ‘I am the light-the way’ on his collar, gun and outfit. So what could that say about his character? In the New 52 Deadshot talked about every action he takes, having a purpose. Every bullet he shoots, having a defined purpose, not to be wasted. In that sense, he isn’t just any other assassin, he’s careful and makes sure that every action he takes goes towards serving a greater purpose. This quote makes me believe we will be getting ‘thoughtful assassin’ Deadshot in the film as well, which I like. Deadshot is a highly intelligent character, and is a character that is always growing with his experiences. In some set photos we saw them filming a flashback scene with his daughter, so perhaps his greater purpose in the film is getting the task done so he can get back to his daughter.

Nitpick: why is his eyepiece on the left, when by the way he’s holding his gun, he seems to be right-handed? Hmmm…

Nitpick: he should have at least one boomerang on him, how bout a little one on his beanie?

Katana, who we didn’t even know was in the movie, looks so very cool! It seems like it’s Katana’s week, as Katana will be in costume in this week’s Arrow episode. She looks like a badass, because she is a badass. I can just see her intense and tough personality clashing with Captain Boomerang, I bet she (and the others as well) will probably get very irritated by Captain Boomerang. Remember Katana’s ‘sword’ is a soul-taker sword, meaning everyone she kills with that sword, has their soul trapped in the sword. So perhaps her and Enchantress will pair up, as they are both more of the magical characters in the group.

Killer Croc, looks like Killer Croc from the ‘Joker’ graphic novel. I’m glad they have gone for practical effects with Killer Croc instead of full CGI. Although it is weird to see him in a hoodie, but I guess the guy is just trying to fit in! Killer Croc looks like he will be the muscle in the movie. In the Brian Azzarello comic ‘Joker’, Killer Croc works closely with the Joker, so perhaps we will see that relationship here as well.

Rick Flag, looks like the straight guy, which he’s supposed to be. Rick Flag is the military guy who wants to get the job done, no matter what he has to do to get there. Standing there with Harley Quinn by his side, he looks the most normal, and looks like the guy who’s going to be pushing everyone to stay on task (and also the one who will be getting annoyed by everyone as well).

Next to Flag is Enchantress, who looks so very creepy. Like horror movie scary. She does look like she has the mystical side to her, and I can just imagine her doing some very messed up things in the movie.

As for Slipknot and El Diablo, I don’t really know much about their characters, but they look like they fit in quite nicely.

Side note: I feel like someone is going to die in the first few minutes of the movie, perhaps one of these two? Like in the Assault on Arkham animated movie, Waller blows up KGBeast to prove a point, maybe one of these two will have the same fate…gotta feeling.

And of course in the background we can see the banged up Belle Reve sign, where the prisoners spend a lot of their time in. Not in this image is Common, Scott Eastwood, Viola Davis, Jim Parrack and Jared Leto. It’s clear that the Joker won’t be a part of the team, and may be the main antagonist of the team, or just doing something else on the side. Also images of Scott Eastwood have been released, with him in military gear. So put those Jason Todd/Red Hood thoughts to rest. So he may either just be some military guy, or he is indeed Wonder Woman’s love interest, Steve Trevor. Although apparently he had the choice of auditioning to play Steve Trevor, or just playing a different character in Suicide Squad, and he appears to have chosen the latter, so we will have to wait and see who he will be playing.

Overall the entire cast are looking great so far. The diverse cast are all looking their part, and you can tell by the image we’re going to be getting a really weird and interesting movie, full of big and clashing personalities, which is what the Suicide Squad is all about.

As someone who absolutely loves the Suicide Squad, I’m really excited by the direction they are taking so far. The costumes look pretty grounded and not too ‘high tech’. This makes sense in the grounded world established by Snyder in Man of Steel. Superman has an amazing suit because his alien father gave it to him, and Batman has an amazing suit because he’s a billionaire. As for the others? Yeah they don’t have that, so of course their costumes don’t look as polished and nice. No internet (a select few), this isn’t Guardians of the Galaxy, some weird and dark stuff is going to happen in this movie. Although expect it to have many funny moments as well. Just look at Harley Quinn, she’s going to break the tension in most scenes for sure! I’m sure Ayer wanted to tweet out this image as filming has gone underway, with set pictures already leaking, so better to show people HQ versions of their costumes, rather than blurry set picture versions. But overall, the Suicide Squad are here, and they look weird and wonderful, bring on 2016!