Gotham Episode 7: Does humour fit in with the show? 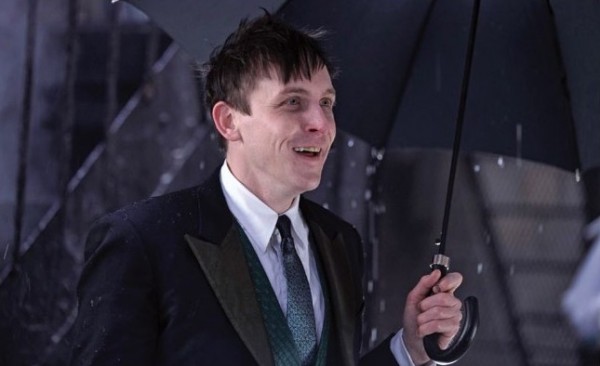 As I continue to watch Gotham episode 7 not knowing if I really like the show or not, I noticed a constant tonal shift in tonight’s episode. Half of the episode was aware of its goofy comic book nature with a lot of jokes that continued to lighten the mood in dire situations. But then the other half of the episode was dark, gritty and serious and wanted to venture into the realism side of things rather than the fantasy. So the question is, which half fits the show more? Should Gotham use humour more and become more self-aware of its ‘comicbookness’ or should it ride the path of The Dark Knight trilogy, and keep things contained and realistic?

Personally I enjoyed the half of the episode that embraced its comic book nature. There was a lot of humour in today’s episode, that made the show become aware of the fact that it’s a show with characters that are called Penguin and Fish Mooney. Everything in the show is ridiculous, the characters, the plots, the fact that some crazy guy can walk into a police department with a gun and no cops do anything. That’s the nature of Gotham, it’s ridiculous. And yes Nolan was able to translate that ridiculousness and ground it to reality, but is that what we still need? I mean we’ve been there and done that, so I saw screw realism and be a little ridiculous.

But don’t be too ridiculous of course, then you travel to the campy side of things and I sure as heck don’t want another Batman and Robin situation. Penguin has the right balance. His character is ridiculous, from the way he walks and talks to his hair, but he isn’t too ridiculous. Fish Mooney on the other hand, I still think she needs to be killed off the show. Her character is way too ridiculous, and just straight out cringe worthy.

Employing more humour in Gotham can be a great way for the show to sustain itself. Because it really can’t take itself too seriously. This is a city who needs a billionaire in a bat costume to save them, I think the show needs to reflect that.

Take Victor Zsasz in tonight’s episode for example. Yeah things got serious when he came in to collect Gordon, and things were pretty tense when he cut another tally mark in his arm, but they also gave his character some humour. For example that wonderful ringtone of his? Just something as small as that is all you need.

Harvey Bullock is another character that brought some well balanced humour into the show. So we have a situation where his partner is on the run from some mob bosses because his partner only pretended to kill a guy called Penguin, so now Fish Mooney is really pissed off. I mean if you say that sentence to some random who has no idea about the show Gotham they will probably think that sounds pretty weird, Penguin? Fish Mooney? What the heck. But that’s Gotham for you, a city full of situations like this. So instead of trying to pretend that things happen like this all the time in the real world, just embrace the ridiculous nature of the show.

So in comes Harvey Bullock, with his um ‘classy’ lady asking Gordon what the plan is. Gordon tells Bullock his crazy plan and Bullock is just like “That’s a good plan! You sit down with a barrel of chimpanzees and a bucket of crack to come up with that one?”, but he still goes along with the plan! Because they’re all a little crazy, so why not chuck some humour into the mix to embrace the fact that Gotham city and everyone that lives in it are a little whack.

And of course it’s fine to have those darker moments in the show to add the dramatic tension, but overall I think that Gotham should embrace the humourous side and just accept the ‘comic book’ nature of the show.

Gotham episode 7 wasn’t as strong as last week’s episode (probably because bloody Fish Mooney was in tonight’s episode) but it still was a small step in the right direction of the show.

Anyways what did you think of Gotham episode 7? Did you enjoy the humour? Let me know!