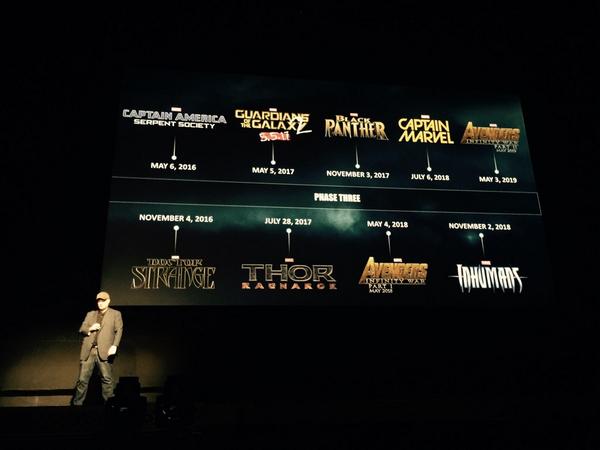 Because apparently it is a war, according to the good people over at Twitter. The #MarvelEvent tag was flooded with “Oh Marvel Wins, DC loses” crap, which is always entertaining to see. Anyways let’s get into a breakdown of the films Marvel has announced (and how they announced it) with a little bit of analysis for what it all means for their biggest competitor WB/DC.

Okay let me preface this by saying that it’s not secret that I’m more of a DC fan (hello it’s even in my header), but at the end of the day I love all comic book films! But unfortunately I do not have the extensive knowledge about Marvel that I do have about DC characters, so a lot of these movies I have little to no knowledge about what the heck they can be about, but taking it at face value I’m going to tell you what I see.

And coming from a person whose studying marketing right now, this is how you announce a slate of films! The Marvel film announcement has gotten itself a number 1 worldwide trending hashtag, #MarvelEvent, and they opened the announcement to the public for those who were actually there and for those who were online reading the live blog. Compared to DC’s announcement I can already see the comments, “Oh Marvel actually cares about their fans, all DC cares about is money”. First of all to that I say, you would be pretty stupid to think that Marvel doesn’t care about money. But either way this was a fantastic way to create an interactive announcement with the fans. It really is good publicity for them and further instills that positive, fan-friendly, image people hold of Marvel in their minds. Okay now let’s talk about these movies:

So we already know about this one and I have already talked about it as you can read here. So there isn’t much to say other than it will become the launching pad for the ultimate evolution and progression of the Marvel Cinematic Universe.

This one we already knew about as well, however even though Deadline reported yesterday that Benedict Cumberbatch was in final talks to play Strange, they did not announce him for the role. Feige went on to say that anything that was not announced here is either false or still a rumour. I just thinks this means they have not locked down his contract yet, so they can’t officially announce him, but I think at this point in time it’s still a pretty safe bet that he will be playing Doctor Strange. This film will be a nice film to enter into the universe as it adds a different element to the universe. Yes Thor has already introduced the mythical side of things, Doctor Strange will propel the Marvel universe deeper into the crazy magic side of things

This is the last one on the list that we already knew about. So again not much to say except it’s a no brainer. Guardians of the Galaxy is the highest grossing comic book film of this year, so of course they are going to want to get this one out as soon as possible.

Thor The Dark World in my opinion was a bit of a let down. I loved the first Thor but felt the second one was ruined by the stupid, 2-dimensional villain. Hopefully the third (and presumably last) Thor film will improve on it’s predecessor.

Okay so here’s when the Marvel vs DC talks really start coming in. Marvel copped a lot of criticism when DC announced their film slate. There was a lot of discussion about DC infusing their cinematic universe with diversity, whereas the Marvel Cinematic Universe was mainly lead by white-blonde haired Chris’s. Well now Marvel has punched that criticism in the face by announcing the Black Panther film, with the announcement of the actor, just in case anybody was worried they would cast a white guy to play him (because apparently these are very real fears of people). Of course they weren’t going to do that, and now with the announcement of this film we can see that Black Panther is in fact coming out before the Cyborg solo film. Sorry DC! But Marvel got you on this one, but really they didn’t because it’s great to see both universes bringing in diversity into their films.

Now don’t say that Marvel are sexist bastards anymore, because they announced a solo female-led superhero flick! We all expected it to be Captain Marvel, so it’s great they have finally committed. Of course the Wonder Woman solo film is coming out 1 year before this film, which I’m sure they considered before dating the film. The solo Wonder Woman film will let the audience become more comfortable with a solo female-led film, paving the way for the general audience to get really excited for the next female-led film, Captain Marvel. Many people were outraged that Black Widow was not getting a stand alone film, but honestly I can’t see her character being able to support her own movie. A character like Captain Marvel will bring something different to the universe, and all this Kree stuff has already been layed out in the films and in Agents of Shield, so it makes sense to give her her own film.

Another heavily rumoured film has become a reality. Half of the announced Marvel film slate are team-up movies, and it’s no surprise. Films such as X-men and Guardians of the Galaxy do really well by introducing to the audience a plethora of characters with their own individual quirks and qualities. Team dynamics are always fun to watch, so this film does have a lot of potential. Now granted I really know nothing about Inhumans, and I still am pretty excited for this film purely because it isn’t a solo character movie.

Oooh finally the Thanos story arc comes to a close in The Avengers Part 1 and Part 2, which are going to be released only a year after each other! Now that is crazy. It’s interesting that they too are going with the Part 1 Part 2 thing, after we heard Justice league will be broken up into 2 parts. Also the Justice League Part 2 and The Avengers Part 2 are coming out in the same year, now that is just pure crazy! What a year, if they are going to end with a cliffhanger, at least we won’t have to wait a long time before the next film.

So there you have it, the Marvel Film slate up until 2019. I wish I could write more about it now, but I have to run out of the door to get to uni!!

Anyways what do you think about the slate? Any one movie in particular you’re excited for? Let me know!