A female Robin in Batman v Superman? Is this a good idea? 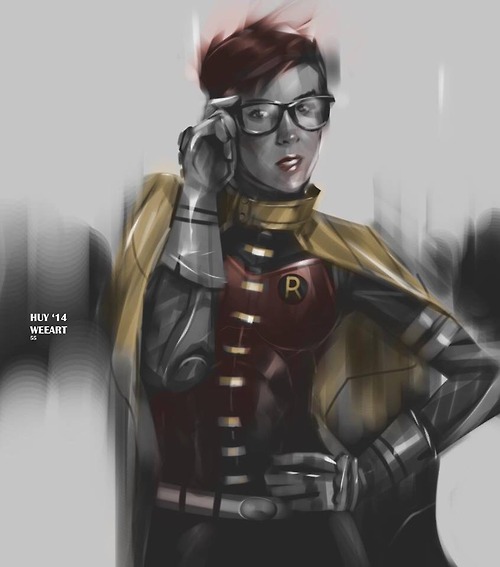 So there’s a couple of things that I want to discuss today. First is this rumour about there being a *gasp* female Robin! Is this really happening, and is it a good idea?

We know that Batman v Superman is going to be heavily influenced off The Dark Knight Returns graphic novel (hopefully not too influenced by the novel because I don’t want to see jerk Superman in this) and now it seems as though there will be even more of the novel translated to the film. Some extra (who apparently may be facing a $5 million fine for breaking his non disclosure agreement wow) has made it known to everyone that there will be a female Robin in Batman v Superman. And if you have read the graphic novel or have watched the animated version, then you know of a little somebody called Carrie Kelley. Carrie Kelley was Robin in the Dark Knight Returns graphic novel, so now we’re hearing that Jena Malone could be playing her. The Hollywood Reporter has already confirmed that Jena Malone will indeed be in the film, and we have seen images of her around with her new red hair, so all clues do lead us into believing she will be Carrie Kelley.

And just like I was discussing in my mini rant post earlier, some of the internet went into a little rage over this. I saw a lot of people talking about how they were deviating from the source material and this is why the movie is going to suck yadda yadda yadda. To be fair, most of the general audience don’t really understand that Robin is a mantle, not a person. They don’t really know that there have been a lot of different people that have assumed the persona of Robin, and they especially don’t know that there have been female Robins. So this is another case of the uninformed raging for no reason which is pretty ridiculous.

Anyways the question is, is this a good idea? I don’t mind either way on this one. My favourite character to be have been Robin is Dick Grayson, but my actual favourite person as Robin is Tim Drake. Dick and Bruce sometimes have a tough time working together, Dick wants to be very independent at times, which obviously doesn’t always work for Bruce.

Not always the perfect pair: Batman and Dick Grayson (taken from Nightwing 30)

Tim and Bruce are a good mix and work really well together. In Dark Knight Returns, Carrie was able to smooth some of the rough edges Bruce had built up over the years. Now the idea of a 13 year old girl being Robin in a live action film is pretty weird, so if Malone is Robin, I’m glad they’re not making her a little girl, because umm it’s a bit creepy if you think about it. I doubt either way that she will have a significant role, considering they have been filming for a very long time and for what we know, she hasn’t started filming any scenes yet.

Having a female Robin in the film could help layer the character of Bruce. We have already heard from producer Charles Roven, that the Bruce in this film will be ‘rougher’ and ‘tougher’, so we know we’re going to see an angry Batman. But with the addition of a female Robin we could see Bruce playing the father role, showing a more caring, lighter side to him. And in my eyes it’s never a bad thing to have a great actress play a strong female character. Jena Malone killed it in The Hunger Games, and has a pretty great resume of movies in her past.

Anyways what do you think about the idea of having a female Robin? Are you for Jena Malone being cast in Batman v Superman? Let me know!