Comparing V for Vendetta to Julius Caesar??? An analysis and discussion 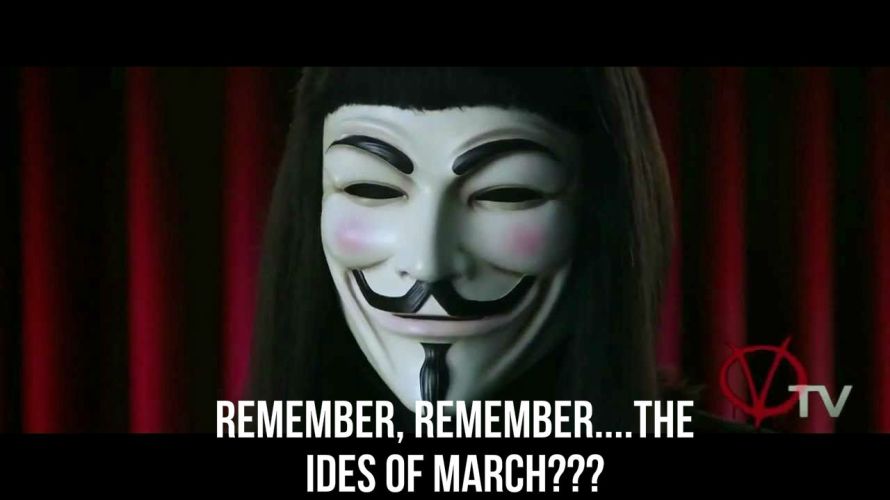 Who said comic book movies and Shakespeare had nothing in common? Now let’s get into an analysis and discussion of one of my favourite non-superhero comic book movies, V for Vendetta, discussing the movie’s themes and characters alongside those portrayed in Shakespeare’s Julius Caesar. Whilst the two may not be similar, they offer different perspectives of the same concerns such as the issue of political loyalty, and both offer characters who cannot be confined to the normal conventions of being either ‘good’ or ‘evil’.

Shakespeare dramatises contrary perspectives of Caesar in Julius Caesar; the perspective of him as a tyrant is conflicted to idealise his leadership quality, and thus the play becomes a political comment on the issue of political loyalty in Elizabethan England. To achieve this Shakespeare represents the conflicting perspectives of Brutus and Antony over their political leader to explore the political disintegration of his own time, subtly insinuating the importance of one’s loyalty to their ruling monarchy.  Throughout the funeral oration, Brutus’ veiled intent was to justify his assassination of Caesar as he says “Hear me for my cause, and be silent…believe me for mine honour, and have respect to mine honour…” Moral imperative and polemical reasoning layer his speech, creating a set of arguments to justify his disloyalty to Caesar. Shakespeare represents Antony’s perspective of loyalty towards Caesar as morally superior compared to Brutus’ through the extreme irony employed; “Brutus says he was an ambitious man, and, sure, he is an honourable man. I speak not to disprove what Brutus spoke, But here I am to speak what I do know.” The constant change in tense, from “he was” to “sure, he is” infers to Brutus’ questionable motives and contradicts Brutus’ noble notions of disloyal political assassination he presented. Thus through the representation of the conflicting perspectives of Caesar and his assassination, Shakespeare highlights his subjective viewpoint of the importance of absolute monarchy and political loyalty to his Elizabethan audience.

In contrast to Julius Caesar, political loyalty is represented as disingenuous in V for Vendetta, becoming an unwavering critique on the world’s policies and administration. The political perspective of the leader Chancellor Sutler is represented ubiquitously throughout the film, with the continuous verbal and visual repetition on signs of the slogan, “strength through unity, unity through faith”. This perspective of strength through unity and faith for his government is conflicted through V’s character, who is driven by a passionate motivation to uproot his tyrannical government. Like Antony in Julius Caesar, V attends to the diligence of his rhetoric in a way that precisely invokes the desired emotions of his audience, noted through his pathos projection of “And the truth is, there is something terribly wrong with this country, isn’t there? Cruelty and injustice, intolerance and oppression”, solely aimed at evoking emotional judgment against Sutler. The representation of V’s speech serves to allow the audience to question their own government, as he says “my hope was to remind the world that fairness, justice, and freedom are more than words, they are perspectives.” Thus it becomes clear that director James Mcteigue’s representation of V’s conflicting perspective of “strength through unity” to his government embodies the message of rebelling and freeing from the contextual real life parallels of the time of the film’s release in 2006 such as George W. Bush’s policies of abolishing civil liberties and use of media manipulation for propaganda, encouraging Americans to stand up for the rights they were losing under the Bush administration.

Mcteigue’s V for Vendetta also allows the responder to consider varying viewpoints, particularly of V, viewing him as either a terrorist or a freedom fighter. Similarly to Caesar, V’s character is not confined by the conventions of absolute good or evil, and conveys aspects of both sides of the spectrum, allowing the responder to perceive him differently. However Mcteigue represents the perspective of V as a freedom fighter as superior compared to the perspective of him as a terrorist. V kills those who were involved in his torture while at the Norsefire’s concentration camp and destroys national landmarks, yet at the same time he is doing so in the name of restoring something England has forgotten, its freedom “Last night I sought to end that silence. Last night I destroyed the Old Bailey, to remind this country of what it has forgotten”. Both V and the government are responsible for terrorist acts. However V’s acts of terrorism are to wake up the people of England to what they have lost, while the Norsefire’s act of terrorism is to suppress the people through fear. Through the recurring motif of V’s Guy Fawkes mask, V transcends his limits as a human being and epitomises the symbol he fights for, freedom for the people, even through acts of terror, “Symbols are given power by people. Alone, a symbol is meaningless, but with enough people, blowing up a building can change the world”. Thus through Mcteigue’s seemingly justification of V’s terrorism and opposition of the Norsefire’s terrorism, he elevates the perspective of V as a fighter for the freedom of England whilst not glorifying the notions of terrorism, similarly Shakespeare highlights the perspective of Caesar being a hero rather than a tyrant, showcasing the complexities of the two characters.

So have you seen V for Vendetta? Can you think of any other points of comparisons between the two texts? If so let me know!